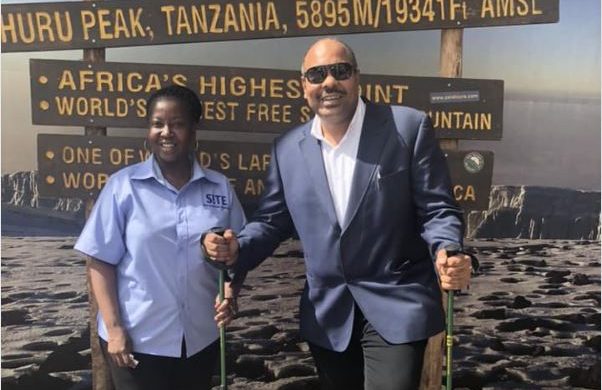 Africa is one interesting continent, from painting Donkeys black and white stripes and trying to pass them as Zebras at a Zoo in Egypt to the Tanzania Tourist Board trying to pass a seemingly photoshopped photo as genuine.

On October 13, during the country’s Swahili International Tourism Expo (SITE), Tanzania Tourist Board shared a photo on their Facebook page of two government officials; Managing Director of Tanzania Tourist Board, Devota Mdachi and Hon. Mahmoud Kombo, Minister of Information, Tourism and Heritage, Zanzibar up on Mount Kilimanjaro.

“Managing Director of Tanzania Tourist Board, Devota Mdachi and Hon. Mahmoud Kombo, Minister of Information, Tourism and Heritage, Zanzibar made it to the top of Mount Kilimanjaro”, read the now deleted post.

At first glance, what stands out is the officials’ outfits. The Minister is in official wear and the Board’s MD is also wearing what we can consider office wear. No one in their right mind would dress like this to hike a hill, let alone the highest mountain in Africa.

After this was posted, Tanzanians started sharing their disappointment, in what they termed a photoshopped image and yes, we also thought it was photoshopped. The image became a laughing matter, as people could not believe the board’s audacity at trying to pass the image as genuine.

“…Been there , But not in shoes and clothes like this 🤣,” read one comment. “Joke of the century but hold on – No one said they hiked – The caption says they made it to the top 😂 whatever the means – They made it!” read another.

After a few hours and over a hundred comments, the board edited the caption of the image to read; “Managing Director of Tanzania Tourist Board, Ms.Devota Mdachi and Hon. Minister Mahmoud Kombo, Minister of Information, Tourism and Heritage, Zanzibar on mock-scene “the model” of the top of Mount Kilimanjaro which was one of the mostly visited sites during the Event.”

Turns out the initial post was a joke that past everyone by, but it’s not our fault, the joke wasn’t clear. The picture was taken on location at the SITE event, with the Mt Kilimanjaro background being a mock scene for people to take photos with. The changed caption did not stop people from laughing at the whole thing and soon after, with over 200 comments and close to 100 shares, Tanzania Tourist Board decided to take down the whole post.