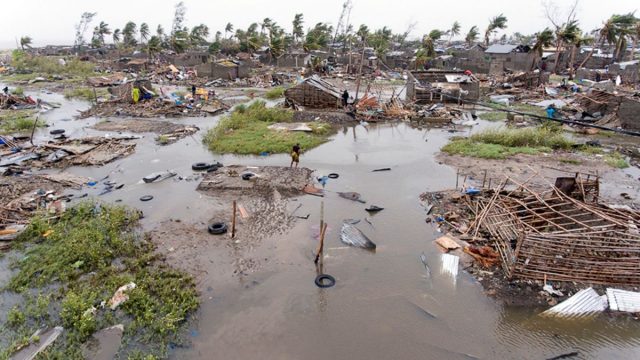 Cyclone Idai, one of Africa’s worst weather disaster to ever strike the Southern Hemisphere according to the United Nation (UN) has affected over 2.6 million residents in Mozambique, Malawi and Zimbabwe.

The disastrous storm began its destruction path on Friday, hitting Mozambique’s town Beira, home to over 500, 000 people, before extending its catastrophic muscle into the neighbouring Malawi and Zimbabwe.

As Cyclone Idai swept through Mozambique, Malawi and Zimbabwe over the past few days, it destroyed almost everything in its path, wrecking cities, submerging homes and roads, ruining crops, causing devastating floods, killing and injuring thousands of people. The landscape has been turned into a giant lake leaving thousands displaced with no roof over their head.

“It is a total mess here. Please pray for the thousands and thousands who have lost their homes. People are in trees and on rooftops. Emergency relief crews are slowly coming in. Rains continue to make it all even harder. So many lives lost and homes destroyed,” wrote Jill Lovell, an Australian who runs a mission school in Beira, in an emailed message

Official death toll surpasses 400, with Mozambique having the highest number of 200  deaths followed by Zimbabwe at 98 and Malawi at 56. Mozambique’s president, Filipe Nyusi, announced three days of national mourning late on Tuesday and said his government would declare a national emergency.

Fearing more than 1000 casualties, the Mozambique government has called upon the International community for help with food, shelter and home for the casualties.

The Red Cross managed to get one truck containing some drugs and tools to make shelters into Beira before it was cut off.  The World Food Programme managed to get food supplies in and is doing airdrops to stranded people.

“Where there was land, there’s now sea. The city itself is completely cut off. It’s really an island now in the ocean,” said Matthew Cochrane of the Red Cross, adding that an emergency appeal would be launched to provide shelter and clean water

Red Cross has started a recovery mission to help families find and identify their missing members.