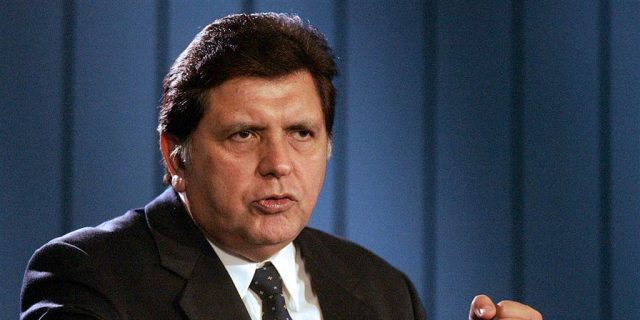 The Criminal Code in Peru punishes violations of corruption laws by individuals and active bribery by domestic public officials with imprisonment or debarment which entails deprivation of office, a prohibition from holding public office, suspension of political rights, prohibition from exercising a profession and removal of honorary titles. In the cases of fines and penalties convicted felon pay the state a monetary amount expressed in terms of penalty days.

Former Peru President Alan Garcia suspected to be involved in a continent-wide corruption scandal, shot and fatally wounded himself on Wednesday when police tried to arrest him according to his lawyer. Prosecutors and police on Wednesday went to his Lima home, saying they had come for a search but he locked himself in his bedroom and shot himself in the head

“The ex-president’s situation is delicate. We pray to God to give him strength. We’ll do everything we can to turn around this unjust situation,” he told reporters.

He received a cardio-pulmonary resuscitation three times and underwent surgery after he was rushed to a hospital near his Lima home at 6:40 a.m. Health Minister Zulema Tomas told the public that Garcia was undergoing surgery, after visiting him in the emergency room.

Garcia reigned South American nation between 1985 and 1990 and again from 2006 to 2011. During his term, he oversaw an economic collapse in his first term before embracing free-market policies in his second term and enjoying rapid growth but was swept up in the Odebrecht scandal and was under investigation on suspicion of taking a bribe from the Brazilian construction giant.

He accused President Martin Vizcarra of plotting to jail him for political reasons after unsuccessfully seeking asylum in the Uruguayan embassy in November when a court barred him from leaving the country for 18 months while he’s investigated in connection with a rail contract that Odebrecht won during his second administration.