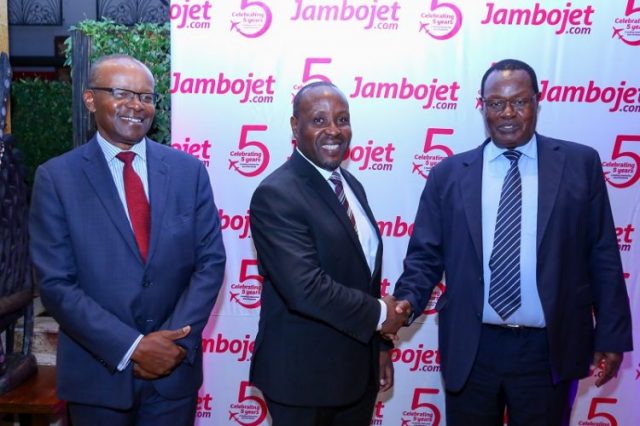 When Jambojet took its first flight in April 2014, its mission was and still is to make flying a possibility for all. In the last five years, the airline has achieved impressive business growth as a company, with an aggressive fleet expansion comprising of 5 Bombardier Q-400  series aircraft.

Today, Jambojet boasts of a 3 million passenger’s mark, flying over 700,000 passengers a year a testament that each day more people locally and in the region are flying with the airline.

To demystify flying in Kenya and encourage group travel with the intention of promoting domestic tourism Jambojet pursued creative and innovate ways to build its brand, and showcase its offering on affordable and quality travel through successful campaigns like #OccupyJambojet, The Fly A Bus, Fly na 50 bob.

As at now, the airline record on-time performance (OTP) is at 86% which is admirable given the highest punctuality score globally this year was by Latin American Copa Airlines with an OTP of 89.79%, a case that could not be accounted for five years ago.

“Safety is a principal requisite in our industry. Our customers need the assurance that they can travel comfortably, affordably and securely to any of our destinations. As we expand our operations into the African market, we are keen to offer value beyond convenience and affordability. Our core promise to our customers and partners is reliability and safety,” said Mr Allan Kilavuka CEO Jambojet.

The low-cost airline has been flying to six destinations from its hub in Nairobi – Jomo Kenyatta International Airport to Entebbe, Mombasa, Eldoret, Kisumu, Malindi and Ukunda (Diani)with Entebee being its first regional route. Thanking the everyone for their support, Kilavuka unveiled a new regional destination they will be flying to next month.

“The launch of Nairobi to Entebbe route was our first regional footprint. We believe with increased liberalisation, we will be able to expand our operations even further, and open up the skies for more Kenyans and Africans to fly. We will soon be flying to Bujumbura as our second regional destination,” he noted.

Transport Chief Administrative Secretary Chris Obure noted that the emergence of low-cost carriers, that is which is Jambo jets foundation, has been part of the evolution of aviation in Africa.

“We are proud of the achievements Jambojet has had in its five years of operation. The airline has been particularly instrumental in shaping the low-cost model which has allowed many Kenyans to fly,” he said.

Looking into the future, Mr Kilavuka said that they are having talks with various governments in the African market as they look to expand their operations to markets such as Bujumbura Juba, Kigali, Zanzibar, Mwanza and Kilimanjaro. That once they have further liberalisation of the skies, Jambojet will be able to expand its operations even further.