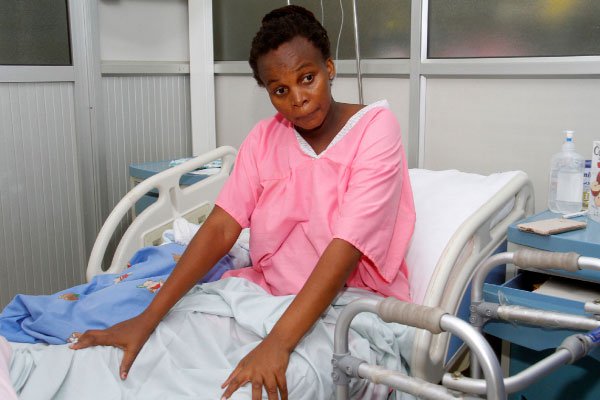 A Ugandan human rights activist and a single mother of five, went to the police headquarters in Naguru on April 24 to demonstrate against police dispersing of the Forum for Democratic Change rallies the deployment at the home of Bobi Wine and the killing of Bobi Wine’s ally by police.

But things fell apart the moment she drove to the police headquarters only to find a barricade at the entrance and police deployed there. Ms Annette Nana Namata insisted on getting inside to meet the Inspector General of Police (IGP) but they said they didn’t have any communication even when she told them that she had been there a day ago.

Several policemen surrounding her car and she was forced to park by the road. One of them stepped aside to make a phone call and she heard him saying that she was alone. One of the seniors asked her again what she was doing there and she repeated that she was going to see the IGP or his deputy. But things started moving very fast and all of a sudden she was surrounded.

“I realised something unpleasant was going to happen. They tried to open the car but failed. Then a woman came and told me to get out and take me to the IGP’s office. I told her that I knew where I was going. In a very short time, I don’t know how they managed to open the car. They started spraying teargas in the car. I remember a man’s voice saying: “Stop spraying, that woman is heavily pregnant.” And a notorious woman replied: “You think we don’t know? It is our right to help her deliver.”

“They lifted me in the air and left me to fall by my back. I remember vomiting when I fell. That notorious woman came and lifted my chin and I remember her telling me “swallow your stuff”. The only thing I remember was seeing the same notorious woman stepping on me. I woke up and saw people surrounding me. I realised I was in a hospital,” she narrated.

While hospitalised, two police officers showed up and asked her to narrate what happened. They refused to let her contact anyone, but her doctor was kind enough to secretly let her contact her aunty. The news was all over TV and two activists paid her a visit. She was later wheeled out and a couple more people including Dr Kizza Besigye came to see her and later organised an ambulance to take her to Kampala Independent Hospital.

“I was examined and told that I had a hematoma on the uterus as a result of a blunt object. Because of the continued pain, I was advised that the removal of the baby needed to happen sooner rather than later. The wait would bring more complications. It was on June 17 when I came here and the gynaecologist decided to remove the baby on June 18. I went to the theatre expecting C-section but complications arose.

“The operation that was supposed to take a few minutes ended becoming five hours because of the hematoma on the uterus, I also had raptured bladder. I bled so much. I was told that because of intense bleeding, my uterus had to be removed. I had to spend three days in Intensive Care. The baby was also in the nursery because it was premature,” she explained.

Although in pain, she said she has never been a violent person and never expected such a twist of events that almost cost her life. The police spokesperson, Mr Fred Enanga, confirmed that the lady had sued police saying that the problem is that some of the activists mistake indiscipline with activism. But since she has gone to court, the police legal department will respond accordingly.