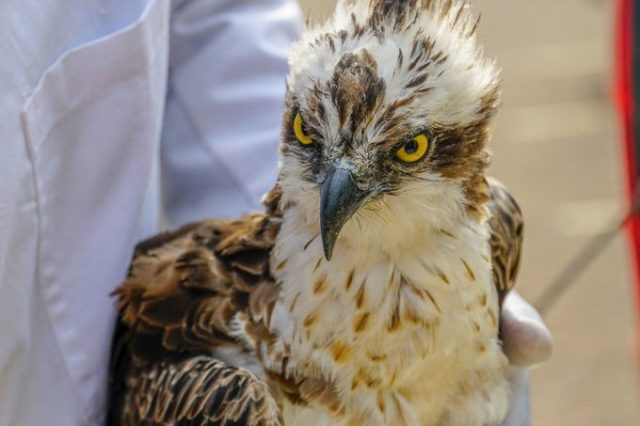 On January 23, Kenya was treated to a rare migratory bird known as Osprey that flew to Kenya from Finland, covering a distance of 6,948 kilometers or 4,317 miles to land in West Imbo Location, Usalu Village, Bondo Sub County in Siaya County.

Unfortunately, the four-year-old bird died on the weekend under the care of Kenya Wildlife Service (KWS) veterinarians and KWS licensed Paptor Rehabilitation Cente in Karen Nairobi and netizens are not happy about it.

“We regret to announce the death of the Osprey bird despite all efforts to rehabilitate it back into the wild,” read an official statement from KWS.

According to KWS, a post-mortem examination conducted on the bird attributed the death to long term starvation which precipitated systemic organ failure. By the time the bird was delivered to the city, it had been severely dehydrated, weak and emaciated from the long flight and minor injuries while trapped by the fishing net.

The bird weighed 950g against the normal range of 1.3-1.8kg weight of an adult osprey and was being nursed back to good health with a plan to release it at the exact site it was rescued in the Lake Victoria catchment so that the bird does not lose its bearings on the return epic flight Northwards in early March.

Twitteratis blamed KWS for not taking good care of the Osprey and reminded the public of the 11 of rhinos that mysteriously died in the wildlife under their care in 2018.

@SenMutula where did this motion reach? See now CS Balala is still incharge and no explanation was given regarding the death of the 11 rhinos in 2018 and now the death of the rare Osprey bird under KWS custody @gabrieloguda https://t.co/NFwH19XljK

2. Someone had the nerve

With corruption in Kenya, KWS probably asked the Osprey for money before letting her free. Now she's dead.

On a serious note, why wasn't it just treated and released immediately?

You killed Rhinos and now killed a poor bird for no genuine reason. pic.twitter.com/TZgP1bU3z9

Given the lack of caution by state agencies responsible for wildlife conservation on threats to Vultures at nearby Hells Gate Park I am personally not in the least surprised that the Osprey died https://t.co/L0592qWILS

3. The bird should have recovered

The Osprey Bird that Flew all the way From Finland to kenya has died as a result of starvation which had caused organ failure. It was under the care of KWS who were taking care of it with an aim of releasing it once it recovered. Just hope we won't be setting aside 5m for burial. pic.twitter.com/35OEHd4AlF

RARE OSPREY bird travelled the whole world only to come to Kenya and die…!🤔
So we're gonna ignore this as just a coincidence?

5. KWS should do better

Sad that the rare Osprey bird managed over 6K KMs on its own,from Finland only to die in a caged custody in the hands of experts 👌#UB40InNairobi pic.twitter.com/691GjXmGHp

So this rare Osprey bird flew all the way from Finland only to come and die in Kenya in the hands of KWS🙄🤔.
We haven't forgotten about our 14 rhinos who misteriously died in the wildlife 😭 #MambaMentality pic.twitter.com/KEV6YcN9FU