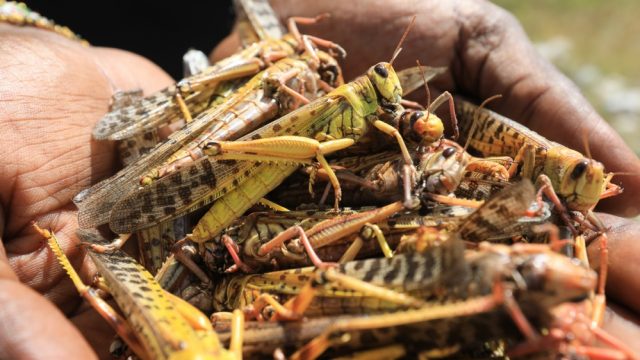 The invasion of the desert locust, one of the destructive locust species in Kenya is a big threat to food security in the country, as the government has failed to contain the situation. These swarms of locusts have already spread to seven East African countries laying eggs along their migratory paths expected to hatch between March and April.

Mandera, Wajir, Garissa, Moyale, Marsabit, Isiolo, Samburu, Meru and most recently Laikipia and Kirinyaga counties have been invaded by the insects whose mammoth appetite for crop and vegetation cannot be contained. Experts have estimated that a large desert locust plague can contain up to 150 million individuals per square kilometer, with half a million locusts weighing approximately one tonne enough to devour as much food in one day as about 10 elephants, 25 camels or 2,500 people.

Government ariel intervention using military jets has not been effective enough,leaving thousands of livestock staring at starvation and farmers helpless with fear of incurring huge losses. United Nation’s Food and Agriculture Organisation (FAO) has called for greater and faster action to prevent a humanitarian crisis in the East African region.

Food technologist Peter Kuguru has offered Kenyan farmers a viable solution to this menace. If one captures the locusts in large numbers and dries them, he is willing to buy them.

“I want to propose to the ministry of agriculture and other related ministries so that they can be able to support the population in harvesting and drying the locust. If someone can go out and collect 20 kilograms of locust per day and sell it to me, even if I buy it at Ksh 50 per kilo, the still make Ksh 1000. I will use these locusts to process animal feeds supplements, and they are good because they bring vitamins minerals and roughages,” he said.

This offers a good opportunity for the youths to make some quick cash, catching them and drying them up for sale. Experts have observed these desert locusts spend the better part of their nights devouring vegetations and until 9.00 am, they are less active. During the day they move large swarms thick enough to cover the sun above someone. They move to warmer places in their migratory paths. With this information, farmers can set traps and kill two birds with one stone.